The Famous ARK in Berea:

In 2012, as part of the 25 Year Iceality Silver Revelation, the Greater Cleveland Area has become recognized as  the Global Home of the Environmental Arts Movement by American Cultural Ambassadors David and Renate Jakupca of the the International Center for Environmental Arts (ICEA) as a ‘Cultural Industry’, to foster civic identity, cultivate jobs and tourism, and brand Ohio Environmental Arts and Culture District in the Bioregion”

The Global Home of the Environmental Art Movement is the region in Northern Ohio that is noted for its growing concentration of Sustainable Design and Technology Industries. Geographically, the region occupies the same area as the Greater Cleveland Area where it is centered and where most of the companies are located. It is in the northeastern part of Ohio, an area stretching from the south end to Akron-Canton, Lorain in the west and Youngstown in the east.

It is visualized as the home for many of the world’s largest technology corporations, as well as thousands of small start ups working on a sustainable future. The term ICEALITY refers to the region’s original innovator, the International Center for Environmental Arts (ICEA), the environmental arts pioneer, but it eventually expands to all sustainable practices, and is now generally used as a metonym for the global cultural of peace sector.

Since 1987, the success of ICEA has spawned a number of other Peace/Environmental Centers throughout the United States and the World, but ICEA continues to make the north coast a leading hub for innovation and development. This question may have occurred to many people’s minds when they came across the term ICEALITY. While its meaning is mostly unknown to them, the revolutionary ideas and developments which have been made in this term affect everyone’s daily life, and it is hard to imagine our modern civilization without them. Greater Cleveland is now recognized as the heartland of the Environmental Peace Industry which is based on the ‘Theory of Iceality on Environmental Arts.

Iceality saw the “development to the LEED program, the Worlds Children Peace Monument, Urban Lakefront Development and has generated a lot of information on elements related to climate change, population and human rights.

David Jakupca, Spiritual Father of the Environmental Art Movement, asserts that, “Respect for human and environmental rights and greater understanding

between people from different racial and religious backgrounds must be the first goal of society in today’s fast-changing, globalized world.”  The goal is accomplished according to Jakupca, “Is by focusing on the creative process and affirming to the principles of the “Theory of Iceality on Environmental Arts”. 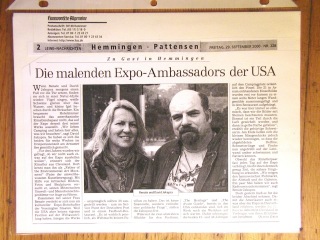 The result of this major global public promotion at the United Nations level, is that the Theory of Iceality on Environmental Arts is now considered as the cornerstone of the modern sustainable global Environmental Art Movement and this concept is now replicated by artists, architects, urban planners and sustainable organizations throughout the World, reflecting a still growing global audience.

Looking at our over populated society in which Sustainability has become a necessity against Ecocide, the crucial role of Iceality in the Environmental Arts and Design Revolution becomes even more evident.

This also makes Iceality a philosophy meaning that there is hope for Humanity after all, and that improvements in our Society can take place daily. American Cultural Ambassadors David and Renate Jakupca see it as a transformation from the rust belt to a place where, “Economics and Culture combined with leading edge technology and thriving entrepreneurship, financial investors and pioneering organizational styles provide the background for the most profound inquiry ever into the Nature of Peace that will affect our planet’s very evolution for centuries to come.”

They would like to convey the image of ICEALITY as the nucleus of the modern sustainable agenda for saving our Planet, presenting the most important developments of major elements which comprise the future which is the relationship between Humans and their Environment through Design and Culture, ultimately promoting an effective sustainable global Culture of Peace between all Living Things in the Human, Plant and Animal Kingdoms.